I started off the month of December finally feeling weather like my body is bracing itself for this time of the year: in Portland, Oregon. 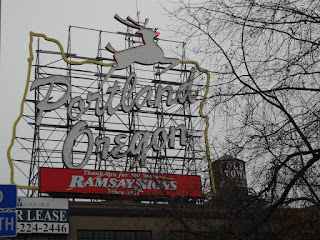 I originally bought the tickets to go north and see my friend Grace and her husband Jason (see pictures from their wedding in late July on this blog) who were living in the Portland area, but because of personal reasons they had to leave the state. I panicked for a moment and thought about either going alone for four days (kind of lonesome and looming, to be honest) or changing my ticket to go see friends in Seattle. But when I mentioned this to my main connected in Seattle, Josie, she jumped on the idea of getting out of her own city. I booked a room and went for it.

Portland is the sort of city where you can get lost in time. There's a lot to see and do, especially in the summer when you can go to all the gardens and outdoors spaces available, and the neighborhoods are full of small shops and restaurants. It really makes me think longingly of Minneapolis. I found myself asking, "What the hell do you think your doing living in Los Angeles when places like this exist?" I realized how much I've gotten used to here in LA that I didn't realize I was getting accustomed to: palm trees, weather, traffic, chain stores, lost of materialism. When I got off the plane, walked down to the train station and sat down next to a man wearing wool socks and Birkenstock sandals, my heart filled with love for comfort, not just being adorable. People had big dogs they walked on the streets! Dogs that couldn't fit into anyone's purse unless they tried! There were pine trees everywhere!

My body slowed down a bit with the cold. I have been missing the urge to hermit up and knit all day and night which usually strikes this time of year. It's cooler in LA now - I wear scarves and gloves for my bike ride up and down the mountain - but when my nose froze for the first time this year I was a little giddy. Maybe I'm romanticizing winter. My friend Lauren who lives in Fargo right now tells me I am. 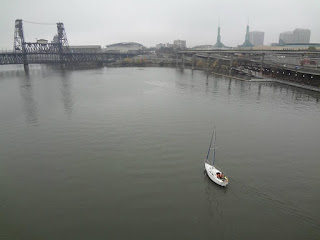 Portland is a city full of books, beer, bikes and hanging out. You can keep yourself busy but why? When you could sit in Powells books all day long or have microbrewed beers with old friends who you have not been able to sit down with and talk to face to face for years? I did get out and see the city and several different neighborhoods and did some shopping and sight seeing. Went to a blue grass band from MN (not TbT) show at a very cool theater and danced the night away in a way you just don't do in the clubs of Hollywood. But I mostly just let myself slow down, do some reading and talking and pondering with lovely ladies. 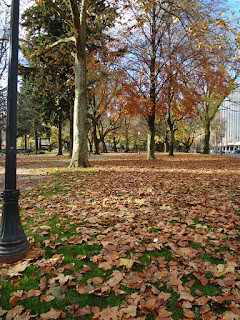 The weather was beautiful! The sun shone for at least a bit every day, it was cool enough to bundle up but not so cold that I was shivering until way after the sun went down. 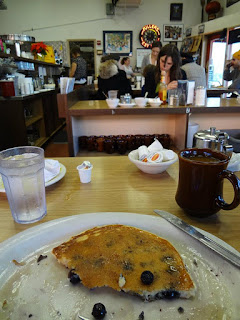 Breakfast at Fuller Cafe, where Josie and I feasted upon coffee, pancakes, coffee and more coffee, just like old times in Boulder. 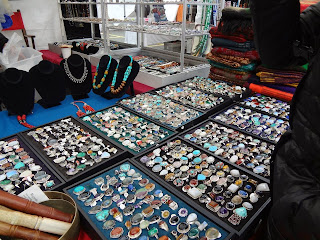 At the Saturday market down by the river. Lots of beautiful colors and rings. I looked for the perfect one, and did get a very nice ring. I've started wearing rings and bracelets since moving to LA. It's kind of strange. I've seen myself becoming slightly more fashionable and its exciting, in a way. I still don't bother with make up, but I do wear heels more often. 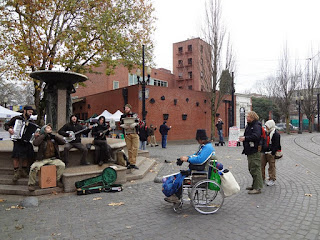 Street musicians of the Pacific Northwest. 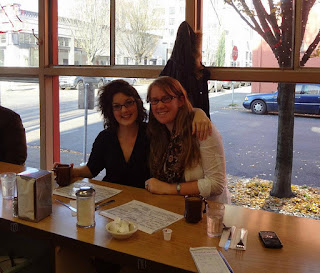 Me and Josie! We had not seen each other since we said goodbye in London, after a life-changing, amazing and yet pretty difficult journey for both of us. We've found each other again and its one of those friendships where you can't deny what we give to each other's souls. We could come together after not seeing each other for years and spend three full days together totally comfortably, even laugh at the scene where we screamed and cried at each other on the train Lyon, France to Zurich, Switzerland. 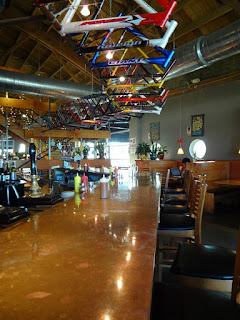 The bar at Hopworks Urban Brewery, where Josie and I stopped for some last beers before our flight and train out of town and where my friend from Duluth, Ally, is working. We were best friends in 5th and 6th grades, stayed close in 7th and our lives slowly fell from commonality for most of high school. Now it seems we can come together again. We spent the afternoon of my first day in Portland together, eating food, drinking beer and majorly enjoying each other's company. It feels good to come full circle with old friends and catch up after so long. 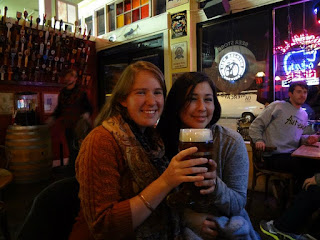 Our boot of microbrewed beer from one of the many local breweries I got to sample this weekend. It was great to explore a bit more of that part of my taste buds. 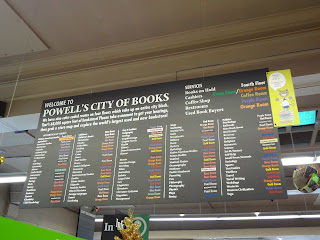 Powell's books, a HUGE book store. This is a list of all the types of books you might be looking for and the rooms you can find them in. The place takes up an entire city block, has several floors and a coffee shop where you are allowed to browse up to five books you are considering at a time. What a good place to get lost with cup of coffee for the afternoon! 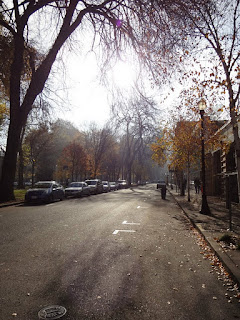 A final note of the beautiful, fall-like weather. A touch in the right direction on getting back to Minnesota for a week and a half at the end of the month!

On a final note, the staff at the Portland Airport are the most friendly I have ever met. Literally. All of them said "Hello! How are you?" And legitimately cared about your day and stay in their city, not just whether or not you are a terrorist sneaking into their midst. It was lovely!
Posted by Katy at 3:29 PM No comments: