Arriving back in Lima after the Inca Trail was surreal. The grey city, with dirt, grime and so many people and the impending change of feeling for the trip weighed heavily on me while I wanted to be picked up by the folks from the group I was volunteering with. When I did get picked up, we took several taxi rides across town, picking up other volunteers along the way and arriving in San Miguel neighborhood, a working-class area full of parks. In each park in San Miguel you'll find a small statue of a Saint Bernard dog with a pile of bags and a hole to drop your dogs droppings after walking them. Going back and forth from the house we stayed at - Celia's house - to Lydia the program coordinator's home, we passed through so many of these parks on streets without names I could hardly get my barrings - not common for me!

Celia's home was really comfortable. Like many homes in Lima, the home that has been in her family for many years was originally two stories with a living space below and bedrooms upstairs with a small outdoor patio area. Later, at a third floor was added later on top without permits or any legal regulation. I visited several houses that felt like a labyrinth of stairs going round and round to different floors each with a kitchen and bathroom of their own. In Celia's house, there was more or less an entire detached apartment with three bedrooms at the top floor, where we stayed. There was internet, hot water, excellent food and great company: everything you could need from a home stay.

Celia, our Mama, had two grown children who both lived at home, as well as a house maid who lived in the house with her son. Her sister, brother in law and their young daughters would come by several nights of the week. Around the house, English was being learned slowly, but luckily one of my house sisters had been studying at a school in Lima for the semester and spoke incredible Spanish. Between the two of us, my broken Spanish and Celia's broken English, even the sister who had no Spanish whatsoever felt at least a bit engaged during the long meal time conversations. 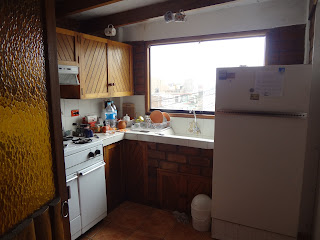 "Our kitchen" at the homestay. Notice how cloudy Lima is in the winter... 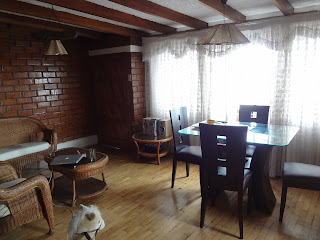 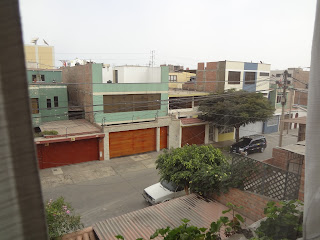 Our view from our third story window, looking out onto the street. 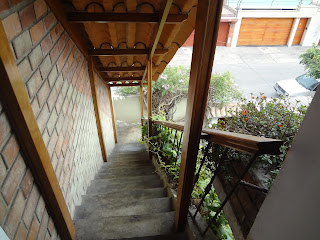 Separate stairwell down to the main gate. 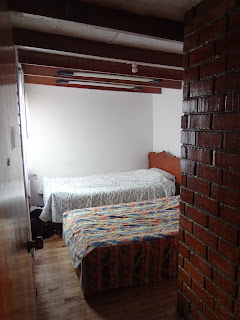 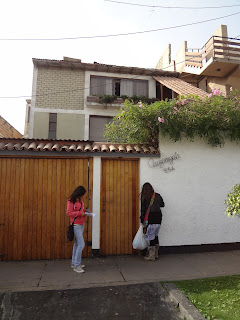 It was during the homestay part of the trip that I felt my Spanish truly improved. With Alfred, I could allow him to speak Spanish and on the Trail there was no need to actually converse in Spanish since we had our guide with us. When I got home, I daresay my Spanish is better than it will ever be in my life, which still wasn't fantastic, but I was moving towards pretty good comprehension and could nearly use the passed tense by the end!

Each day we would get picked up by friends of the program coordinator Lydia, young people who attended the church she was a member of who got a small paycheck to cart us foreigners around from homestay to volunteer site. We would walk through the streets of San Miguel and I'm embarrassed to say I never quite figured the neighborhood out - being so dependent upon these guides the whole time. This nearly proved to be disastrous one day when no one picked Sarah and I up from the orphanage (another story for another time) but we did make it home before nightfall, which is the most important thing. Typically our days would start around 7am, we'd come home for lunch around 2 and leave again for an afternoon/evening work day then dinner after 9. Lunch was the biggest meal of the day in Peru. Dinner was usually a delicious, warm soup - perfect before getting into bed on the chilly chilly nights. For those who were staying for longer volunteer time periods, there was flexibility to not work all day every day, but for those of us only around for a week or two we could fill all day long at different sites, getting a feel for a bit of everything. 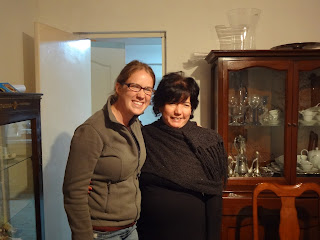 That's Celia and I on my last night.
Posted by Katy at 8:55 PM No comments: