When Alfred and I were driving up towards Big Sur in January, we cut across the state towards the coast about halfway between LA and San Francisco. It was cloudy and wet. The two lane highway was curving between hills we could hardly see and the lack of housing was stark compared to the millions in LA. Suddenly, all around us, there were vineyards and wineries. When I think of California wine country I think of Sonoma and Napa Valleys, greenery and lush hills. These wineries are in the middle, drier part of the state, clustered around the city of Paso Robles. (For the record there are also several wineries in Temecula, which is even farther south and even drier.) We reached the sea shore without even realizing it that January day - the fog was so thick.

We decided to make a quick stop at Hearst Castle to see if a quick tour is possible, but thank god we didn't go that day! Not only were there not tours available that rainy morning, it would not have been worth the money to drive up the hill and not get the views. Plus we were trying to get to San Francisco up the 1 and we had a long way to go that day. We decided to return some day soon.

Memorial weekend opened itself up as a good opportunity. The first goal was Hearst Castle, but the wineries were a close second. We found a little B&B in Cambira, the little sea-side town just down the road from Hearst, booked the last room available and spent a really nice weekend wandering the two sides of the village, perusing shops, eating good food and smelling the ocean. It was a warm, sunny weekend with hardly a cloud in the sky. 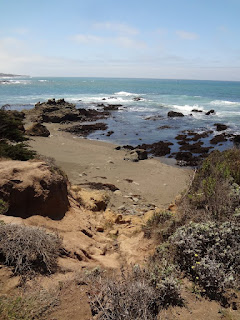 On one side of Cambira is the ocean 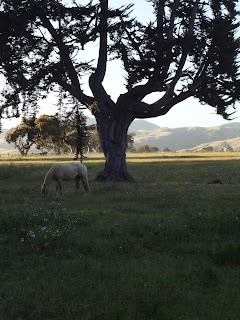 And on the other are rolling hills 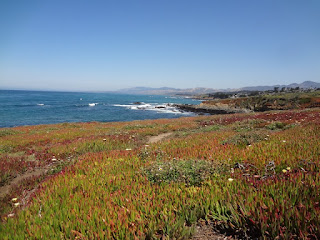 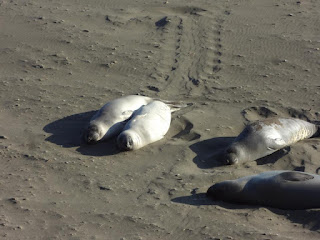 We stopped by a beach where Elephant Seals beach throughout the year. We were there during the molting and resting period of their cycles. Apparently all year long there are at leas some seals on this beach, resting just below the boardwalk. 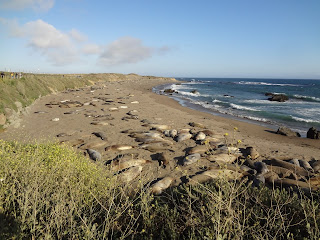 Sunday afternoon we went Eastward, towards Paso Robles, where the wineries and vineyards are. It was my first time exploring a tasting room and doing any real "wine tasting", though I have been enjoying wine for a few years now. All the folks who worked in the tasting rooms were very friendly and opened about their wines, not acting like we were too naive (which we may have been). It was warm and sunny and the ground was drier than I somehow imagined it would be in a vineyard. Apparently, wines from the Rhone region of France grow best in this part of California, where the climate is nearly the same. We had several red blends that were really great. One of the folks told us that the best time of the year to come is September and October, when all the grapes are ripe and the hills look like fall leaves from other parts of the country. 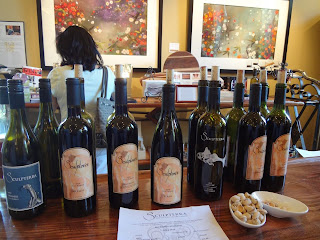 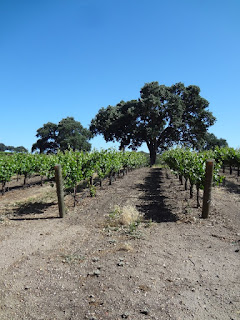 One of my favorite parts of this area was the old growth oak trees that vineyard growers are not allowed to cut down. They add an ancient feel to the area. 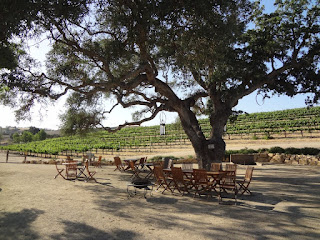 I brag about this all the time, especially to people who have just discovered the band, but if you have not heard, my parents live next door to the mandolin player from the band Trampled by Turtles. Eric and his wife moved in a few years ago and my sister babysits their kids from time to time. Of course I am not at home nearly as much as I would like so I can't claim to know him well but there have been many Clover Valley gatherings where we've chatted over a beer. Trampled by Turtles has gained their small spot in the national spotlight. They've been to LA twice since I moved here - the first time colliding with my trip to Portland - and their shows in Minneapolis are always sold-out hits. Since I live far away from a lot of their die-hard MN fans and I've got an "in" with the band, I got into their Hollywood show for free on the VIP list on Tuesday, which was fantastic! 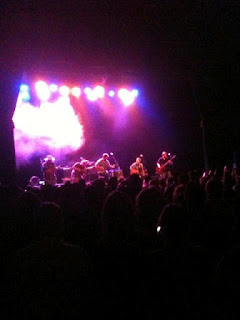 I'm pretty sure nearly every Minnesota transplant who has found themselves in LA was at this show. All around me I heard people chatting about popular Minneapolis places like First Ave and Lake Calhoun and they called the band members by name, talking like they knew them. Alfred came with me and at one point mentioned everyone seemed to have a very particular "look" at the concert, which I'm pretty sure is just Minnesotans.

Of course it was hard to forget we were in Hollywood. Stepping outside onto the rooftop terrace you get the view down Hollywood blvd to the busy downtown area that somehow I am becoming familiar with. I'm getting to the point where I know neighborhoods and slowly I'm beginning to trace fingers on the map between places, learning how to get around and know more parts of this huge city. 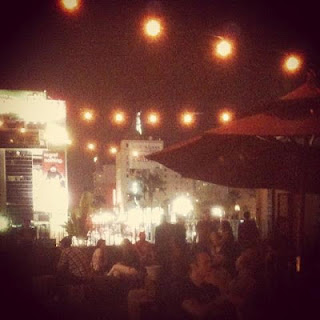 Across the board, I've been doing a lot and keeping myself busy. Things are going very very well, though the stress level in my life steadily shifts and changes, waves up and down. I've begun to apply to new jobs for August, have some leads on housing and am planning my trip back to Minnesota in early August. Too early to know anything and I don't function well in not knowing. But this is a good lesson for me, I'm sure. Being present and grateful for what I've got as well as keeping things in perspective. It will all work out. It always has, one way or another, even if its not what I've planned. I'm trying to remember how much I like the way things have turned out in the past out when all doesn't go according to plan, since there really is no plan as of today.
Posted by Katy at 1:27 PM No comments:

What To Remember When Waking

In that first
hardly noticed
moment
to which you wake,
coming back
to this life
from the other
more secret,
moveable
and frighteningly
honest
world
where everything
began,
there is a small
opening
into the new day
which closes
the moment
you begin
your plans.
What you can plan
is too small
for you to live.
What you can live
wholeheartedly
will make plans
enough
for the vitality
hidden in your sleep.
To be human
is to become visible
while carrying
what is hidden
as a gift to others.
To remember
the other world
in this world
is to live in your
true inheritance.
You are not
a troubled guest
on this earth,
you are not
an accident
amidst other accidents
you were invited
from another and greater
night
than the one
from which
you have just emerged.
Now, looking through
the slanting light
of the morning
toward
the mountain
presence
of everything
that can be,
what urgency
calls you to your
one love?  What shape
waits in the seed
of you to grow
and spread
its branches
against a future sky?
Is it waiting
in the fertile sea?
In the trees
beyond the ?
In the life
you can imagine
for yourself?
In the open
and lovely
white page
on the waiting desk?
- David Whyte