Adrienne Rich died today. I have not read too much of her, but I should. This piece of the poem "Integrity" is how I have been feeling lately. Torn. Working to bring it together. To make it beautiful, even though it's painful.


I asked to open myself up a bit in the last few months. Was feeling a little stagnant. Remember what you asked for in these moments. Now I feel change. I feel the hurt of growth and of being challenged by my own demons which feel to be opposed to who I want to be. She says it best here though. I'll let her speak...


"Anger and tenderness: my selves.
And now I can believe they breathe in me
as angels, not polarities.
Anger and tenderness: the spider's genius
to spin and weave in the same action
from her own body, anywhere --
even from a broken web."
Posted by Katy at 9:25 PM No comments:

More than half of the year in LA for the EUI Program is over now. Only about four and half months remain at this job and with this program. I don't have much to say about how I feel about that, since I'm not really exploring it right now. No reason to mourn things before they happen, as has been my habit in the last few years. I'll update you on how I'm dealing with the openness of ending and beginning as well as the stress of finding a new job and home in just a few months, I'm sure.

Last week, the program took us to Santa Barbara again for another retreat. We were at a different center this time, with larger grounds and more groups around. We were also joined by all the other Episcopal Service Corps interns around the state of California. Even though I wouldn't think of myself as an "LA girl" it was pretty obvious when we arrived which among us were from LA and who was from Berkeley, simply based on our clothing styles. It was good to meet folks from all around the state, not to mention get some quiet, reflective, re-connective time with myself and the group. Got some thinking done. Got some writing done. Feel more centered at the other end of it.

Some images of La Casa De Santa Maria, where we spent our week: 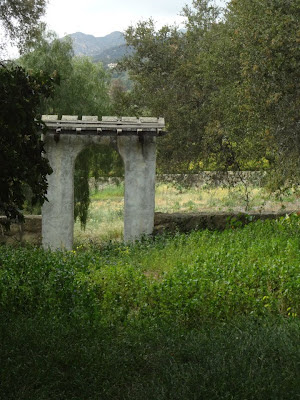 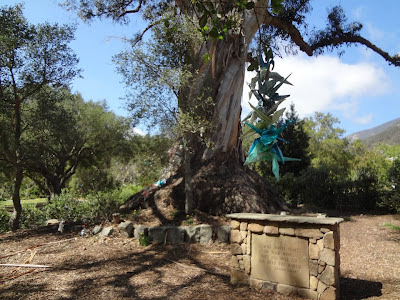 Since I've moved to LA I think it has rained about 4 times total. From time to time my roommates from rainier climate (Sarah and Hanna) and I wistfully look out the window and say to each other "I could use a good rain storm right about now." Of course, that's me ignoring how miserable I would  be riding my bike each morning in the rain only to arrive at work dripping and cold in jeans sucking at my legs. BUT a good weekend rain, that is something I could dig my hands into lately. The sort of day that's cool, but you open the windows just a little bit anyway so that you can smell and hear the water, where you make a big cup of coffee or tea and sit around reading that novel you've been ignoring, or the magazine you got in the mail a few weeks ago that's been sitting next to your bed. That, my friends, is what I'm talking about.

I don't know if anyone ever told me this (Aaron maybe, in his one-year knowledge of Southern California weather?) but in my head I've had the idea that it rains all winter here. People have told me that typically it rains more than this year (less than 1.5 inches all winter long) but that winter isn't like it was in Merida last year, at least once a day if not a few times.

This weekend, Alfred and I went to Oxnard (just north of LA on the other side of the San Gabriel Mountains) to a birthday party for one of his family friend's daughters. It was raining when we woke up, heavy and full outside the window he had left ajar the night before. All day it rained on and off all. Los Angelenos are pretty much hopeless in any weather, even rain, so there was a bit of traffic leaving town, but once we were going through the mountains traffic cleared away and felt good. No thunder. No lighting, but a good healthy rain storm. Southern California needs it anyway.

When things began to clear up in the afternoon, we had a double rainbow spreading through the whole sky. 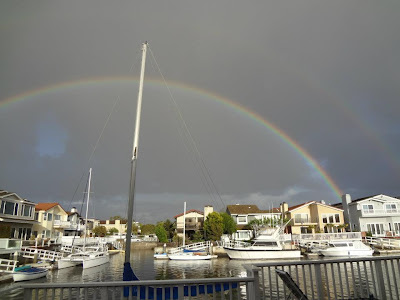 Also note that Alfred's family friends live in a place where your back yard is a channel for your sail boat. There were blocks and blocks and blocks of houses like this, surprisingly far inland. I liked it. Big surprise.
Posted by Katy at 3:52 PM 1 comment: